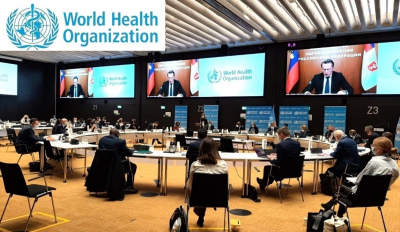 January 29, 2022 saw the conclusion of the 150th session of the Executive Board in Geneva, Switzerland, where members agreed on the agenda and resolutions to be considered for the Seventy-fifth World Health Assembly in May 2022.

The agenda of the Executive Board included about 40 items for discussion among which consideration candidate for the post of World Health Organization (WHO) Director-General.
Dr Tedros Adhanom Ghebreyesus received overwhelming support for his nomination for a second five-year term as WHO Director-General from the Executive Board Members. As the only nominee, Dr Tedros to be re-elected at the Seventy-fifth World Health Assembly.

The Member States reviewed agenda items regarding strengthening WHO preparedness for and response to health emergencies, including influenza preparedness; poliomyelitis eradication measures; the prevention and control of non-communicable diseases; budget, finance and management matters related to improving the efficiency of WHO's work and the quality of support the Organization provides to countries.

The Russian interministerial delegation is headed by Mikhail Murashko, Minister of Health of the Russian Federation, who in statement noted importance of data on medical and demographic indicators collecting, recording morbidity and mortality, as well as Digital Health development.

«We note that today more than 100 countries in the World still have problems in recording medical and demographic indicators. Therefore, we are ready to propose organizational and methodological support specifically in the system of collecting data on medical and demographic indicators, accounting for morbidity and mortality, since the Russian Federation is one of the world leaders in this area and is ready to initiate its development.

Now we can see that pandemic COVID-19 has become a catalyst for changes in Global Health systems, of course, in the development of digital technologies, this is a unique chance to advance these areas. Therefore, the Russian Federation is also ready to participate and assist as well as being one of the leaders in this area».

During the session, national and regional experience in responding to preparedness for and response to health emergencies announced. Also participants considered information on the potential establishment of a new Executive Board Committee: the Standing Committee on Pandemic and Emergency Preparedness and Response (SCPPR) with a view to strengthen the Executive Board’s effectiveness and responsiveness.

Russian research Institute of Health is playing an active role in preparing inputs and position to the Russian delegation on the related agenda items of the Executive Board.

For full information and main documents see the link below: https://apps.who.int/gb/e/e_eb150.html