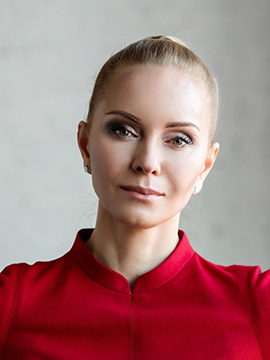 Olga S. Kobyakova was born in Tomsk in 1974. She graduated from the Siberian State Medical University (SibMed) with a degree in medical science, then completed postgraduate and doctoral studies.

After graduating from SibMed, she worked as a doctor at the Tomsk Regional clinical hospital. From 2003 to 2014, she was on staff at the Tomsk Region Department of Health working her way up from a chief specialist-therapist to the Head of the Department. In 2012-2014, she joined the EMBA program at Kingston University (London) on strategic management.

Under her leadership the SibMed studentship increased by 58% from 5455 to 8625 people, while the University consolidated budget expanded by 57% from 1.9 billion to 3.1 billion rubles. Dr. Kobyakova introduced a training program in general medicine in English, set up a department of distance learning at the University, opened new 485 beds at the University dormitories and launched the "Digital hospital" project.

In 2019, Dr. Kobyakova wrote "Health without zealotry". The book has sold over 10 thousand copies. Olga runs her own Telegram channel and Instagram blog with over 60 thousand subscribers.

On August 18, 2020 Dr. Olga Kobyakova became Director of the Federal Research Institute for Health Organization and Informatics of Ministry of Heath of the Russian Federation.